These are the questions on James Cameron’s mind in “Alien Life” the first episode of James Cameron’s Story of Science Fiction, which aired last night on AMC. With Cameron as interviewer and guide, this six-part documentary is exploring sci-fi through the storytellers and stars who brought the genre to life. 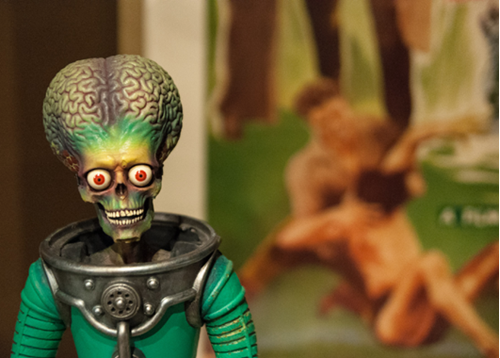 This is one of my favorite aliens at MoPOP.

This episode made me wonder “what would the science fiction genre be without aliens?” There would be no friendly helpers, no drippy angry unknowable monsters, no god-like overseers, and, worst of all, no Mac from Mac & Me. Kidding.

Aliens, the show tells us, often work as a metaphor. These foreign creatures mirror human behavior and let us examine our motives from the safe vantage point of fiction.

And, as this episode shows, there are many types of aliens.

There are altruistic aliens like in Steven Spielberg’s Close Encounters of the Third Kind, where the director’s goal was to show that “good propagates a better good.” There are alien invaders, creatures who want nothing more than to take over our planet like in Independence Day and War of the Worlds or our bodies like in Invasion of the Body Snatchers. 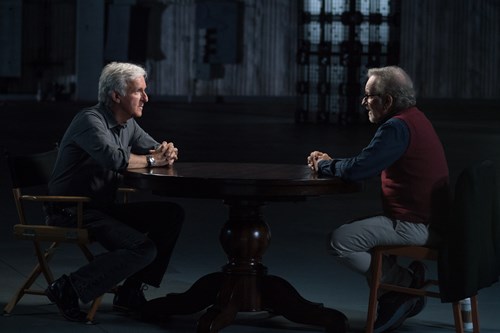 But the alien that really caught my attention is one that currently lives in MoPOP’s basement. That’s right, I’m talking about the exoskeleton-sporting, two-mouthed creature from Ridley Scott’s Alien. 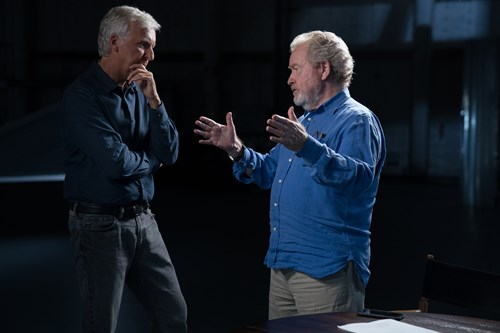 The best films always seem to encounter a challenge that turns out to be lightning in a bottle, and Alien was no exception. Since special effects were especially challenging before the dawn of digital effects; directors often chose to show their creatures as little as possible, cutting away at the last moment. But due to the Alien story, Scott wasn’t going to be able to use that technique. “He’s present. I can’t cut around him. I have to see him.” 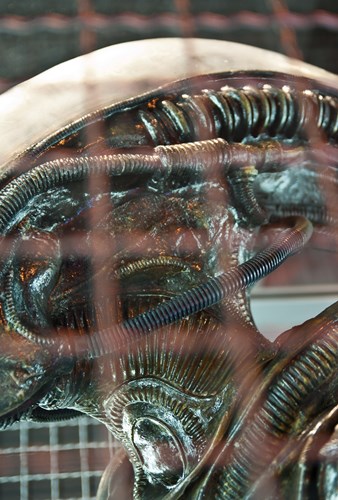 Fortunately, Scott had a plan. He employed artist H. R. Giger, whose work the director described to Cameron as “like showing me a dirty postcard.”

With a background in industrial design, Giger’s work was simultaneously organic and mechanical, elegant and sexual. There was nothing comparable. “It was a very sinister world, and not a world I had ever seen in a film,” lead actress Sigourney Weaver said of first seeing Giger’s design concepts.

Armed with a unique design, Scott moved to the other aspect that would make or break the alien: casting. 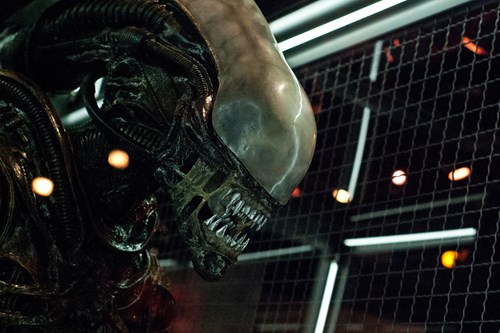 I'm not scared, you are.

Played by the statuesque seven-foot tall art student Bolaji Badejo, the alien took on a shape that was truly unique. Sigourney Weaver recalled that Badejo’s “limbs were so beautiful and exotic that he already looked like he was from another world.” Scott also kept Badejo away from the rest of the cast during filming to retain his “otherness.”

It’s this mixture of complex design and simple physical distinctions that made this alien one of the most terrifying in film history. It looked like nothing the audience had ever seen, while still retaining something vaguely familiar thanks to the actor inside the suit.

For me, this is what science fiction does best, combining the known and the unknown to create something completely new. Those creations leave an indelible mark on film history; one that rarely dulls with age. 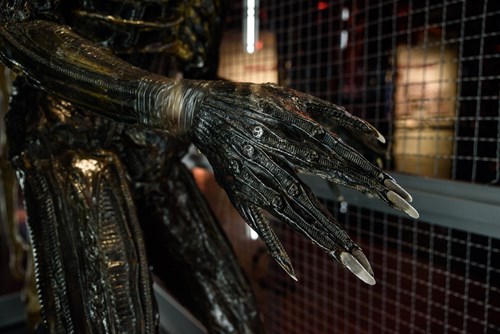 When I visit the alien costume Scared to Death: The Thrill of Horror Film, I’m always struck by how little it looks like a suit. From the exquisitely foreign design to the impressive stature, if it wasn’t behind glass I might take an extra step back.

What will the aliens be like when we make first contact? I think we can all agree with Steven Spielberg when he said “I want those guys to come in peace.”

AMC Visionaries: James Cameron’s Story of Science Fiction airs Monday nights at 10/9c on AMC. Make sure to tune in next week when Cameron and his guests discuss space, the final frontier.