On March 19, 1988, Kurt Cobain, Krist Novoselić, and Dave Foster played their first show as the band Nirvana. Before that landmark show, they went by several names including Skid Row, Ted Ed Fred, Pen Cap Chew, and Bliss among others. But the trio decided to go with Nirvana for their show at Tacoma’s Community World Theater 30 years ago, becoming a pivotal moment in the band’s history.

Situated halfway between Seattle and Olympia, Tacoma was a centralized city for regional bands, and the Community World Theater became a gathering place for acts of all sizes. 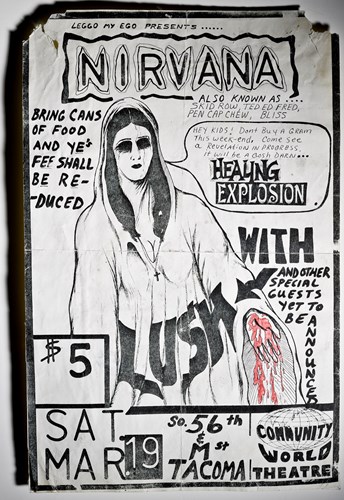 Kurt Cobain created this poster to promote the show, combining his recognizable style with a very unique type of thievery, as Krist Novoselić explained in the audio tour for Nirvana: Taking Punk to the Masses:

“Kurt made this poster. He hand-colored a lot of these, and then we would put them around—mostly in Tacoma, but then in Olympia. See how weird the art is. Because these kids would go to the cemetery and steal these plastic statues of the virgin Mary, and then Kurt, again he would always have to express himself, and he would transform them into weird—they would look exactly like this, and they would be on the front porch. It scared people away.” – Krist Novoselić

You can see this poster and nearly 200 more Nirvana artifacts in Nirvana: Taking Punk to the Masses at MoPOP.