Drag Star!, created by writer Evan J. Peterson, is the world's first drag performer RPG where you're a contestant on a reality TV drag competition. A 150,000-word interactive novel by Peterson, Drag Star! is entirely text-based, without graphics or sound effects. Your choices control the story, fueled by the unstoppable power of your imagination (and sass).

Drag Star! was recently added to MoPOP's Indie Game Revolution exhibition, and to celebrate, we caught up with Peterson, the game's creator, to learn a little bit more about it. Check out the interview below, and if by the end of it you're wanting more Peterson content, join us for this Friday's It's Coming From Inside the House! online horror watchalong of American Psycho (2000) where Peterson will serve as our special guest!

How did the idea for Drag Star! come about?

Evan J. Peterson: "I had an in with Choice of Games. I was originally going to write a different game for them, but I just lost interest in the original topic I pitched. I pitched this new one and they liked it and they felt that I was the one that could pull it off. It's been pretty amazing because I was always the person who wanted RPG engines that you can do anything with. Like, let's take the platform and apply it to the world of William S. Burroughs, or the world of Clive Barker the way that they do with Call of Cthulhu and all these different things. So I thought, well, an RPG is an excellent medium for a drag performance simulator. And with this being all text, it offers more opportunities of what can be done versus if this were a first-person video game, or if this were an animated game with pre-drawn art it would be very limiting. But here, it is powered by player creativity."

Is drag an artform you're passionate about?

Evan J. Peterson: "I did a lot of drag when I was younger. But drag these days is very competitive and it is definitely an expensive and time-consuming venture. So now I just do occasional genderbent cosplay, and I'm more gender fluid in general. I use all pronouns. So if there's a convention I'll dress up for it, but I'm not big on wearing heels or prosthetic breasts or anything; these get in the way of the rest of my costuming. But I love drag. I just love the creativity. I don't watch the drag shows for the drama — the sniping and the in-fighting is really inconsequential at best and kind of hard to watch at worst. I watch to see, 'OK, what is this person putting together this week? How are they going to knock my socks off?'"

What was the process of making Drag Star! like? Were you involved in any other aspects beyond the content writing?

Evan J. Peterson: "So, I didn't realize that I would be debugging it myself when I signed the contract. I knew I would make suggested edits to the final draft, but I didn't realize that debugging was also my responsibility. I had to teach myself the coding language of this particular company. They use ChoiceScript, so I had to learn how to code. And it's very rudimentary code, but it's still code. There was a big learning curve and a lot of frustration in the beginning, but once I got the hang of it.... If you play the game, you might notice the things you can do become more sophisticated from start to finish, and that's because that's the order that I wrote it in. As I became more familiar with this kind of code I was able to try more things and offer more options to players and track more data. It was not easy, and I think that's why Choice of Games offers such creator-centric contracts, because I have zero objections to anything in the contract I signed with them. And I think they do that because most people can't do this and a lot of the ones who can will just lose enthusiasm and not follow through. It is a rare person who has the skills and the commitment to finish a game like this."

You've described Drag Star! as "an LGBTQ+ utopia." How so?

Evan J. Peterson: "During development of the game I struggled a little bit with how real should I make it. Should there be homophobia, transphobia, racism, etcetera that the characters encounter and have to deal with? It's a hyper-real world. There's no explicit magic, so it could exist in our world, but everyone is a bit larger than life. So there are some homophobic villains and transphobic villains, but they're very cartoony. It's not quite clear what they want, other than a heteronormative world. So it's a lot less nasty than that sort of struggle becomes in our real world. And there's no denying that what I wrote is using the template of a creative reality TV competition. There are a lot of similarities to shows like Dragula and RuPaul's Drag Race, but I really wanted to take things beyond that so that I wasn't just making a knock off. Part of that, and this is before Dragula started actively recruiting performers of all genders, there was a lot of debate within the fandom and the drag community about well, where do people who've already transitioned gender fall, or even belong, in the world of drag? And the answer to that, if you're truly progressive and open-minded, is they belong wherever they want to be, right? So it was important to me to have a lot of trans characters, non-binary characters, real ethnic diversity. There's a little bit of diversity of ability. There's a character that is mentored, they're an aspiring drag queen or king, depending on what gender you choose in the game. And this character is in a wheelchair, but they're not a competitor on the show. And I wanted to at least have that representation to show that drag is available to all bodies." 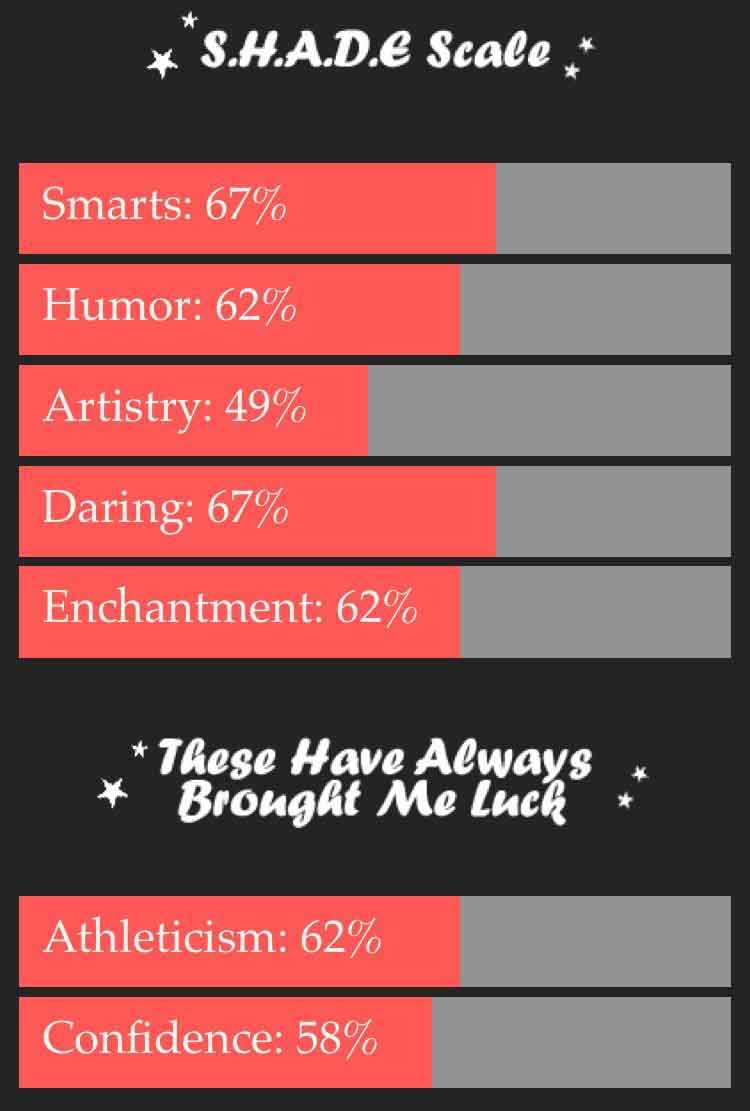 In Drag Star!, players are out to prove their skills on the S.H.A.D.E. scale: Smarts, Humor, Artistry, Daring, and Enchantment. How did that come about?

Evan J. Peterson: "There is a similar acronym in RuPaul's Drag Race and the acronym itself is often objected to because it's casually misogynist. Four traits that the judges look for in a winner are charisma, uniqueness, nerve, and talent. So I wanted an acronym that was not misogynist that would represent some of the same things, but that could be actually quantified. It is hard to quantify something like nerve or talent, but on the S.H.A.D.E. scale it's a bit easier to qualify something like Daring. Daring is my version of Nerve, Enchantment is my version of Charisma — and of course in D&D you get a Charisma stat, that's pretty common for role-playing games. Over at Dragula, they don't have an acronym, but because it's a horror drag competition they want Horror, Glamour, and Filth. So you have to demonstrate all three effectively in order to win that show."

What does it mean to have Drag Star! featured at MoPOP inside Indie Game Revolution?

Evan J. Peterson: "It means so much to me. I worked so hard on this game. And because it's a text-RPG it flew under a lot of people's radar. The people who love it, love it so much. It has its die-hard fandom, but a lot of people haven't noticed it simply because there's no animation, there's no sound, it's a textual play through. We have banner art that was created by Xhavier Jacobsen who is a friend of mine. To have it enshrined like that in a museum shows that it has cultural and academic value. It's not just a way to while away the time. Also, being a queer creator it's fantastic to have something celebrated for its queer content instead of fetishized or stigmatized for its queer content. Honestly, I was able to get my foot in the door [at MoPOP] because I just asked. I know a few people who work for the museum or have worked for the museum in the past and people will say, 'Oh yeah, Evan's great. You should definitely answer his e-mail.' Many, many creative opportunities in my creative career have come to me because I just asked for them. I think that that confidence and audacity are discouraged in a lot of corners, but I had the great honor of interviewing Clive Barker in his home over several days and one thing he told me was that a writer has to be self-centered because no one is looking out for us. Not the publisher, not the reader. We have to do it all ourselves. So, that's what I did. I said, 'Hey, can I put my game in your museum?' And COVID-19 made that process very protracted, but it's in there now. And it's good to see other text-based games in the exhibit. I don't feel like I'm in this red-headed stepchild corner." 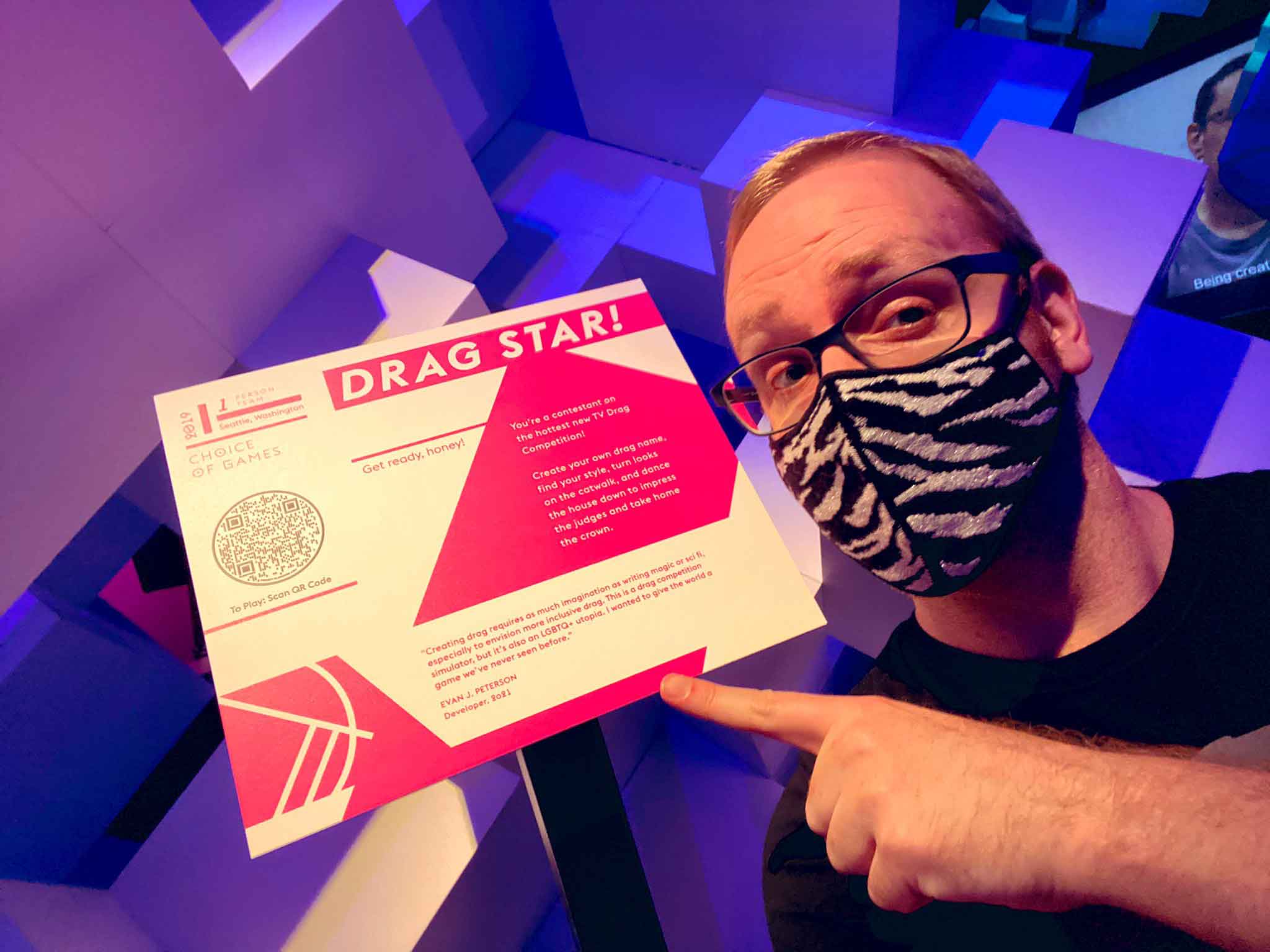 Evan J. Peterson poses for a photo in front of the Drag Star! placard on display inside MoPOP's Indie Game Revoluition exhibition

What advice would you have for other writers, content creators, or video game developers?

What's next for Evan J. Peterson?

Evan J. Peterson: "I'm working on a new game. It's not a direct sequel to Drag Star!, but it is about superheroes. So it's a sci-fi/fantasy game, and it's been really tough to concentrate on programming and writing that during the pandemic, but it's coming. People can rest assured that the next EJP RPG is on its way."

If you're interested in checking out Drag Star!, head over to ChoiceOfGames.com to learn more, purchase the game, or start playing for free! You can also check out Evan J. Peterson's next book and connect EJP on Twitter, Instagram, Facebook, LinkedIn, and YouTube.