What do a 1986 Chevrolet Beauville van, a quilt made of heavy metal concert t-shirts, a faded hand-written fax, and a sticker-littered desk have in common? Well, for one, they're part of the Museum of Pop Culture's collection, so you know they carry some sort of pop culture significance. Beyond that, they're all artifacts that have tie-ins to Founders Award 2020 honoring Alice In Chains, our nonprofit museum's annual fundraiser that's set for 6 p.m. PST on Tuesday, December 1, 2020.

This past week on MoPOP social media, we used images of those four obscure objects as a way to tease the upcoming announcement of our online benefit's extensive tribute artist lineup, which has since been fully unveiled. But we didn't want to leave the MoPOP community hangin' on the origins of those artifacts we teased out. So, now that the full lineup is out in the world, we're here to recap what exactly those objects were, what Founders Award tribute artists they were teasing, and provide a bit more context on each piece's place in popular culture. Check it out below! 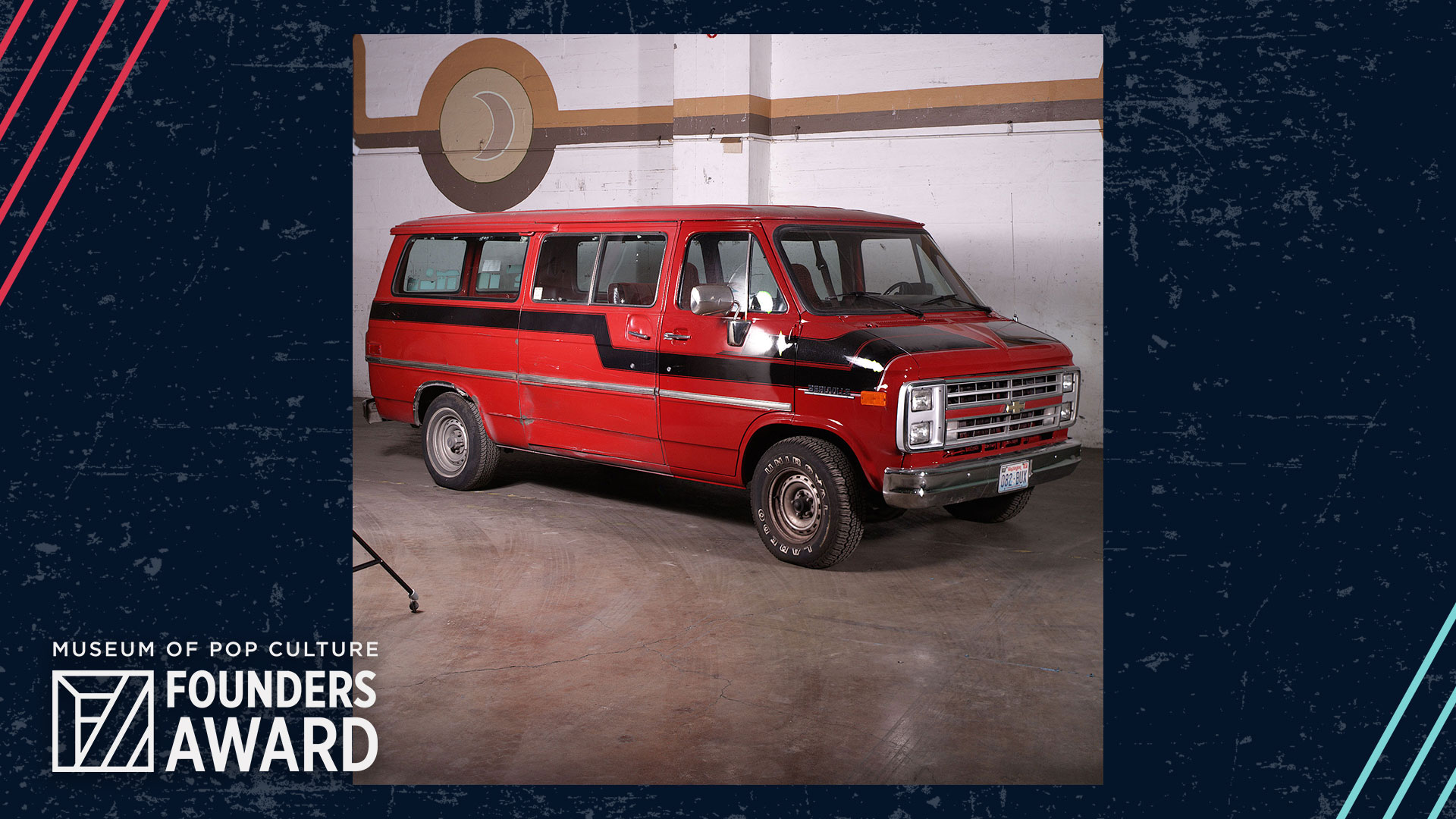 The van was gifted to MoPOP by Kim Thayil, Soundgarden's lead guitarist, who will perform alongside other members of the band at Founders Award 2020. Lily Cornell Silver, the daughter of Soundgarden lead singer Chris Cornell and Susan Silver, is also on this year's list of Founders Award tribute artists, as is Mark Lanegan, former lead vocalist of Screaming Trees.

By 1988, Soundgarden was becoming increasingly popular outside of Seattle. They had moved from Sub Pop to SST, which at the time was the pinnacle of indie achievement. In October 1988, SST released the band’s debut full-length, Ultramega OK, which raised their profile further. Soundgarden commenced on a U.S. tour, packing their equipment into this 1986 Chevy Beauville van. By the end of 1988, they signed to A&M—becoming the first grunge band to sign to a major label—and began recording Louder Than Love, which was released in September 1989.

Soundgarden's Kim Thayil says: “We knew we needed a van that was bigger to haul more gear, and that perhaps had working air conditioning and windows. And so we found this ‘86 Beauville in early ‘88. It was a good deal, so we bought it and Hiro [Soundgarden bassist Hiro Yamamoto] built a futon frame in the back for sleeping. Underneath the futon we stored our luggage, and amps, and guitars. We did a tour that way all the way to New York, played Boston, a few small clubs, and a West Coast tour. Then we had a bigger tour booked by SST. It was a little more thorough. We were touring with a band called Sylvia Juncosa, she was opening for us. Now we got a U-Haul, so we put all the amps in there, but the more intimate articles like the guitars and our underwear, we put underneath the futon frame. And then we did a couple months around the US, up through the South, and Texas, and Florida, and even got pulled over in Louisiana by some local sheriffs and a few DEA agents, and they went through the damn thing on the side of the road. We just stood on the side of the road and looked at lizards.” 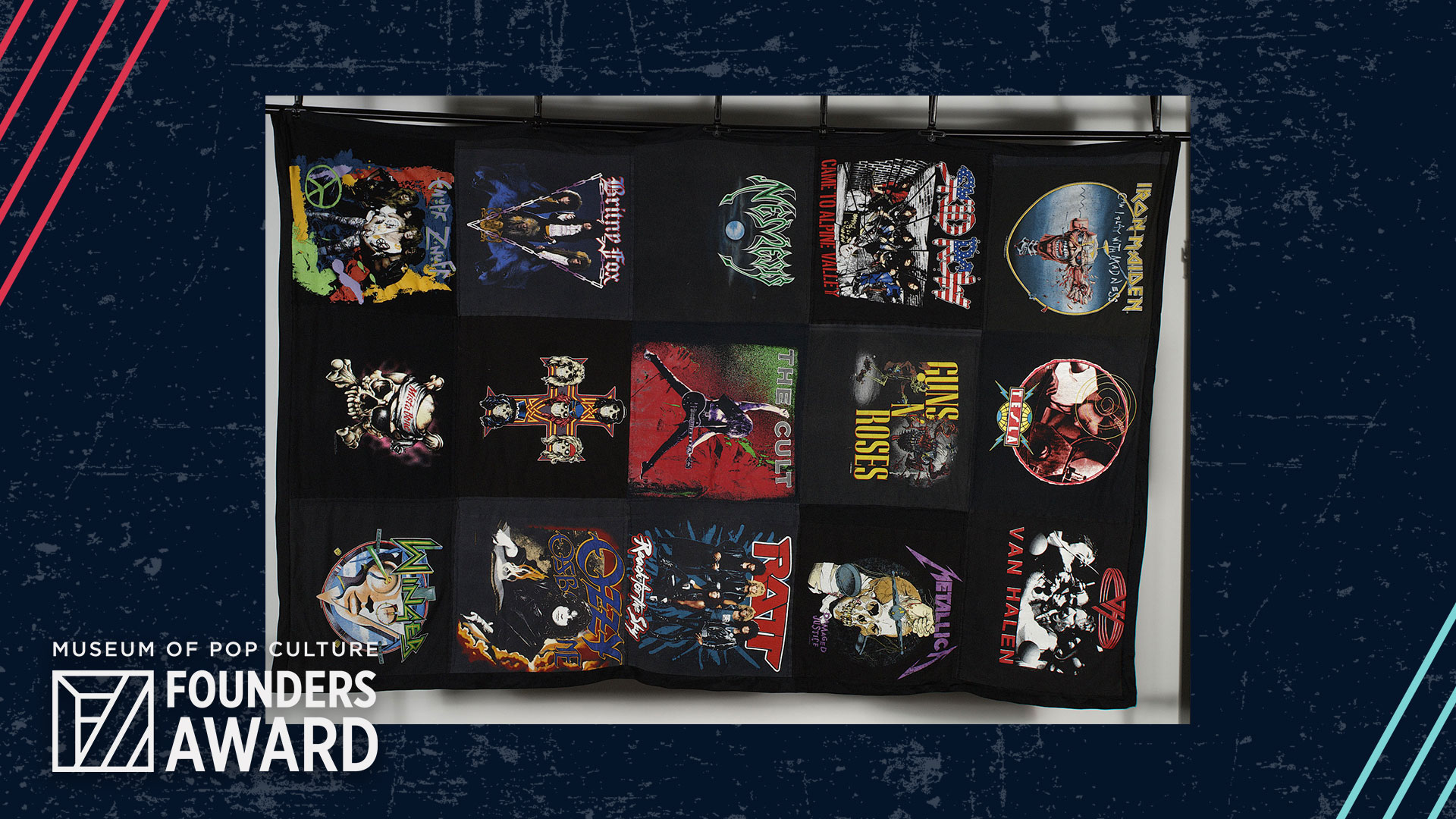 There's a couple Founders Award tribute artists depicted here, including Metallica and Guns N' Roses (Duff McKagan), who are each set to perform at this year's event.

The release of Nirvana’s Nevermind on September 24, 1991, and its rise to the top of the Billboard charts signified not only the mainstream ascendance of grunge and alternative rock, but also the deposing of glam metal as the rulers of rock ‘n’ roll. At the time, bands such as Skid Row, Winger, Ratt, Britny Fox, and others reigned over the rock charts, and reveled in spandex, big hair, flashy solos and easy women. Sales of Nevermind and MTV’s constant rotation of the “Smells Like Teen Spirit” video changed all that, breaking down a wall that divided underground punk culture and mainstream tastes.

Quilt designer Julianna Peterson says: “The Butt-Rock Quilt came about when I was in college and no longer felt cool wearing a Skid Row shirt! I didn't want to get rid of the shirts, because they were all important to me in high school, so I decided to make them into a quilt. I designed it so that the shirt back would be in the same spot as its corresponding front when the quilt was turned over. All of the shows were from concerts that I went to in the Midwest, and most have the tour dates on the back. The band Nemesis was from my hometown of Beloit, Wisconsin and were a favorite among the high school kids. I thought it would be funny to include them with all of my other favorite butt-rock bands.” 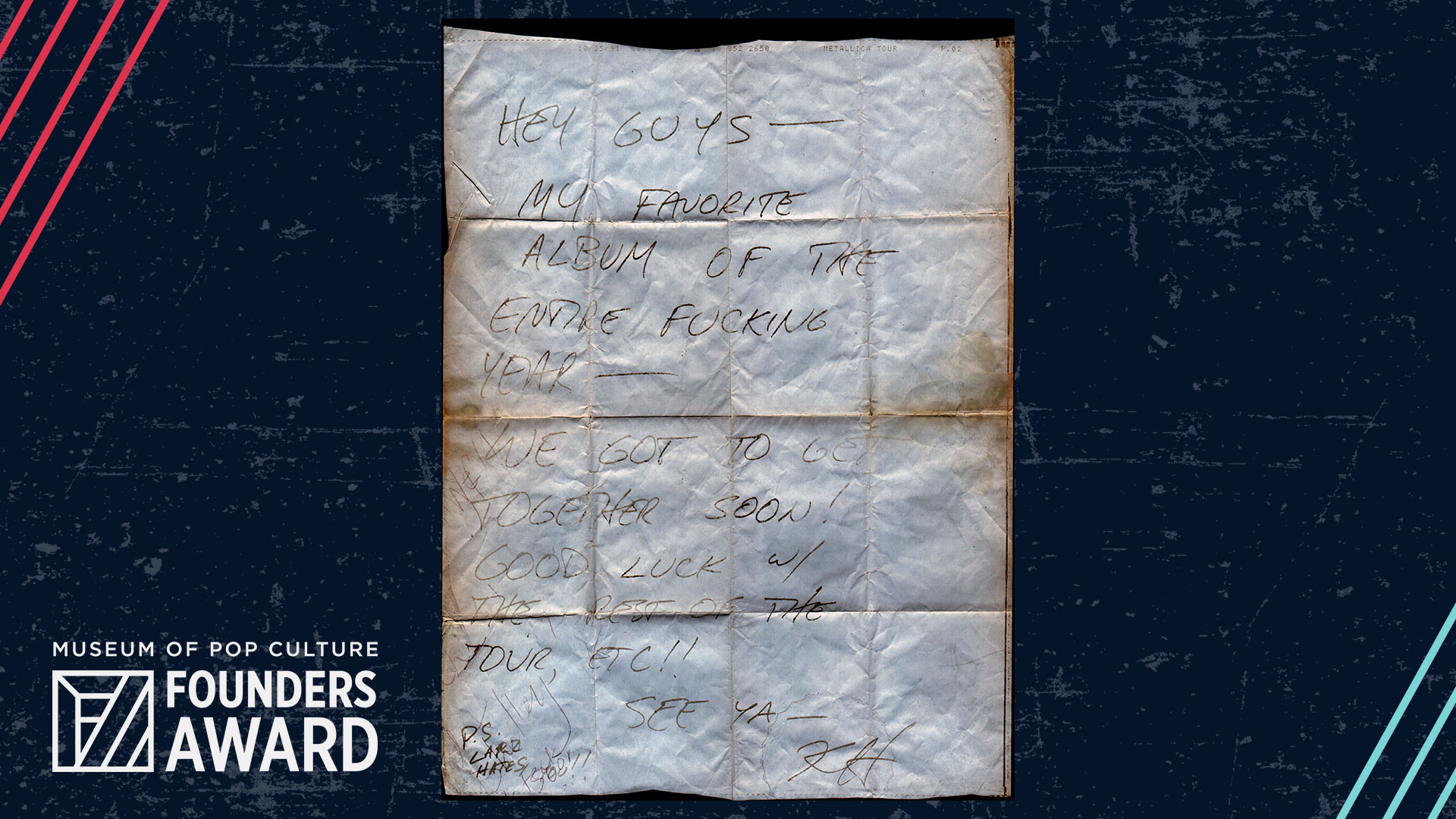 Fax from Metallica's Kirk Hammett to Nirvana on October 25, 1991, congratulating them on the release of Nevermind.

Metallica is the most obvious Founders Award tribute artist name to pull from this tease, with the fax signed "KH" (Kirk Hammett) and a "Larz" (Lars Ulrich) mention hiding in the bottom-left corner. The fax's recipient was likely a little harder to identify, but Nirvana bassist Krist Novoselic will also perform at MoPOP's virtual event, as will Giants in the Trees, a band Novoselic formed in 2017.

The fax (and its colorful language!) not-so-subtlety hints at Metallica's affinity for the Seattle grunge band's release, with Hammett calling it his "favorite album" of the year despite his own band's "Black Album" releasing on August 12, 1991, a month prior to Nirvana's Nevermind.

Desk formerly owned by Jan Gregor and Soozy Bridges, promoters who booked hundreds of bands for the Central Tavern and The Off Ramp at this desk from their Seattle office called the “War Room.”

The stickers decorating the desk represent the various musicians that Gregor and Bridges booked, including well-known grunge acts like Soundgarden and Nirvana, whose members are slated to perform at Founders Award 2020. Alice In Chains stickers are also present, plus stickers for Screaming Trees (Mark Lanegan), Rage Against The Machine (Tom Morello), and Mother Love Bone (Jeff Ament), who will make appearances at this year's virtual fundraiser.

The most notable Central Tavern show that Gregor and Bridges arranged was the one that connected Nirvana with Sub Pop’s Bruce Pavitt and landed the band with its first record deal.

When the Central closed in late 1990, the two promoters moved their offices to Capitol Hill and began booking shows for The Off Ramp. In the early 1990s, Gregor and Bridges organized several notable grunge performances at this venue, including Soundgarden’s film debut in Singles and the first live performance by Eddie Vedder with Mookie Blaylock, later to become Pearl Jam.