If ever there was a movie to romanticize Pacific Northwest mythology this is it. That’s right -- what better way to demystify our beloved Bigfoot than with a comedy pointing out that this terrifying creature may be stinky, but it sure is lovable!

The film opens on Seattle urbanite family, The Hendersons, on their way home from a camping trip in the Cascade mountains.  Not too far down the road, their car hits an “animal” crossing in front – only it’s not an animal that they’ve killed, it was bigfoot.  So, what else are they to do? Why not strap it to the roof of their car and take it home with them of course. As you may have guessed (or seen) Hijinx of all kinds ensue after that. 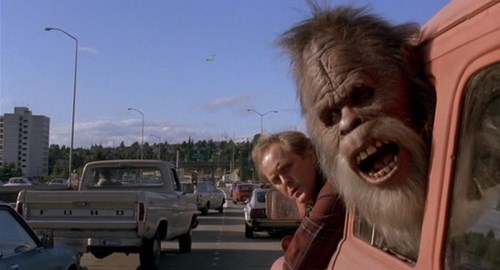 Harry and The Hendersons was filmed throughout Washington State with locations in North Bend, Wenatchee National Forest, Seattle and (of course) a cameo by the Space Needle. While the trailer does a great job at amplifying the Pacific Northwest vibe but was a little too coy identifying what the “ferocious monster” was. As a result, the film missed the mark on getting their target audience to the theater.

If you haven’t seen it or just want a refresher of the film, you can check out the trailer below.

If only Bigfoot was as friendly as Harry, right?! 😉