There's no mistaking the 1969 icy blue Fender Competition Mustang that Kurt played in the "Smells Like Teen Spirit" video, but this iconic guitar also showed up at a unique performance in Seattle the month after the video was filmed. 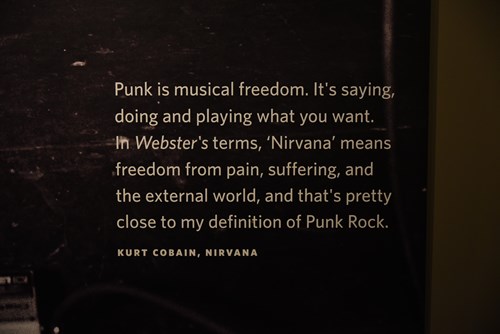 On September 16, 1991, eight days prior to the release of “Nevermind,” Geffen Records organized a record release party at a small indie record store near UW called Beehive Records. The idea was for the band to be on hand to sign autographs while the new record played in the background. Naturally, the band thought this idea was boring, and they opted to perform instead. The record label was only expecting 50 people to show up for the 7:00pm event, but by 2:00 there were over 200 eager audience members waiting in line, which really freaked out the band (Kurt in particular). By the time the event started, the store was at max capacity, and those left outside had to resort to peeking in the windows to get a glimpse of the intimate performance. 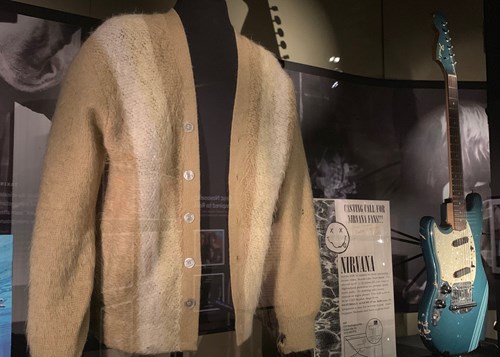 Nirvana performed to a packed house for 43 minutes, playing songs from both "Bleach" and "Nevermind.” The entire performance was captured on video, which is easily found online. Not only will you spot the Fender Competition Mustang, but you'll also see the Hiwatt LA412 speaker cabinet that is currently on display in the Nirvana: Taking Punk to the Masses exhibition. Oh, to have been a fly on the wall that night!