Fashionably Undead 9: An Experiment in Terror is fast approaching, and as we gear up for the big event, we’re highlighting some of the amazing folks from the horror community who are bringing the party to life. Isabella L. Price, this year’s Fashionably Undead master of ceremonies, is Seattle's only Horror Hostess, combining a love of horror and burlesque performance. She has a background working in film, costume design, screenwriting, podcasting, and teaching, and she currently hosts a monthly horror show at the Northwest Film Forum called Nocturnal Emissions. We sat down with Isabella to ask about her horror roots, how she incorporates burlesque with horror, and more.

Isabella: On October 31st, 2017, on a night much like this, a dark form crawled out of the pitch-black waters of Elliot Bay covered by a thick carpet of fog. This form dragged herself to the Hollow Earth Radio station in the Central District and began hosting a radio show called Nocturnal Emissions. For a year, the creature talked about the latest bits of horror movie news and which monsters she'd like to smooch. Then she was approached by another shape in the dark and began showing horror movies once a month at the Northwest Film Forum.

How do you bring people who are averse to horror into conversation about the genre?

Isabella: The misnomer is that all horror movies are the same, that every horror movie is basically about sexy cheerleaders who get slaughtered in the woods. But that's not true. There are many sub-genres in horror, so many that nearly anyone can find what they like. Nearly. Don't hold me to that.

Horror is ubiquitous, everyone has fears, and if Jungian theory turns you on, we can all tap into the same evolutionary anxieties. The Dark. Masks. Spiders. Old Houses. Spirits. We all have very similar reactions to things that we experience in life that leave us unsettled. Horror is a great way to explore the things in life that make us feel uneasy. For me, I love haunted house movies because the afterlife is such a mystery to me. These feelings are natural, it is natural to have dark, scary thoughts so I encourage people to allow themselves to experience horror films as a way to get in touch with those thoughts and release them. Often in horror journalism, we volley between the perspective of the killer and the victims, not because we want to be killed or because we want to kill someone else, but because there is a need to ask questions of the human experience. If I ask someone to talk to me about Jordan Peele's Get Out, for example, we can talk about feeling alone in a situation that is alien to us, and how it feels to be alone with people we don't know. By the end, we can talk about how it felt to go away to college or meet your in-laws. It's actually very cathartic. Horror can be incredibly cathartic. Once you get past all the open skulls and brains falling out. 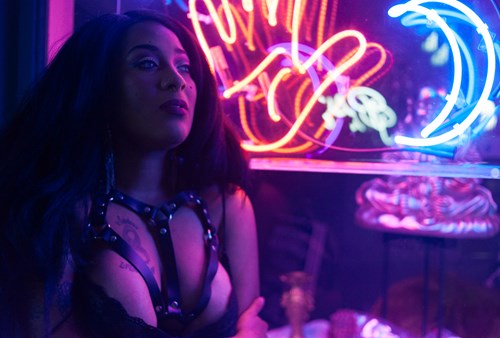 Why pair burlesque with horror? How do the two art forms relate to one another?

Isabella: Burlesque and horror really come from similar roots. Around the turn of the century, there was a show called The Grand Guignol in France, which would stage real-life and fictional murders. This was years before Serial or Forensic Files or My Favorite Murder, but people still wanted to be scared, titillated, and gawk at the forbidden. These stage shows were a way for people to indulge their voyeuristic urges in a safe place, and the same goes for burlesque. Where the Grand Guignol played with ideas of mortality, burlesque did the same with gender and sexuality. Burlesque was a way of indulging in things that make people scared and titillated. Some people are more afraid to explore their own desires than they are to explore death. Which is a trip! Horror and burlesque both operate in the realm of farce. Horror takes things like fears and anxieties and makes them beatable in 90 minutes flat, making even the scariest thing silly. Burlesque takes societal conventions and turns them on their head, at one moment making even the silliest thing sexy.

If budget wasn't an issue, what is a burlesque interpretation of a horror film that would you like to produce, and how would you do it?

Isabella: This is such a dangerous question! Never give a woman with a dream a blank check! I would love, love, love to do a show that was like the 1967 stop motion movie Mad Monster Party. It would just be a crazy cabaret of burlesque, drag, sideshow, comedy, and exhibitionism. It would be a dinner show like the burlesque shows of old, with a menu that would be a terrifying list of food like garlic smothered steak (medium rare of course), strawberry shortcakes with bleeding jelly fillings, and midnight black cocktails that bubble and spew frothing gas. There would be a house band that would play everything from jazz to hip hop to heavy metal, dressed like tuxedo-clad zombies. No one could get in unless they were also monsters, or you'd have to wear a costume — no normies. The audience would be as eclectic as the people on stage. Every night I would ascend from the floor in a coffin and introduce the world's best performers. It would be MARVELOUS!

Learn more about and buy tickets for Fashionably Undead 9: An Experiment In Terror at mopop.org/fashionablyundead

Robert Rutherford is the Manager of Public Engagement at MoPOP who loves Free To Be You And Me and Hellraiser in equal measure.