Sharmaine strives to create an open environment for her audience – a space where everyone feels welcome – and she’s succeeded. While her subject matter ranges from carefree to heartfelt, Sharmaine never fails to bare her true soul, letting you in to her experience one note at a time.

One thing’s for sure, when you listen to Sharmaine, you’re going to feel good.

You can catch Sharmaine live at Sound Off! Semifinals February 23.

Sharmaine: I’ve been listening to a lot of Ariana Grande and Whitney Houston, Beyoncé, Rihanna. I listen to other rappers too. Travis Scott, Kanye, stuff like that. 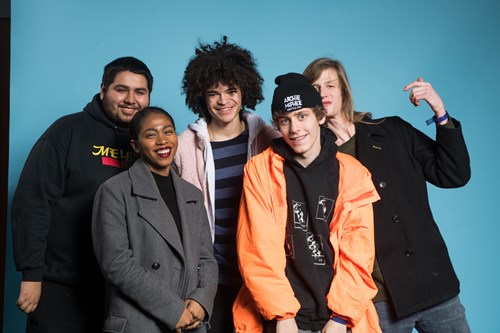 Do you have any songs that would be random? Not expected?

Sharmaine: I don’t. I have a lot of different songs, but I barely know the artist. You ever have those weird songs that are in your playlist, but you don’t really pay attention to the artist? That’s me.

Sharmaine: I make music to express myself and to express what I’m going through authentically, when I don’t have words for them, just speaking. Why am I the only one talking?

Jonah: I feel like you kind of have to because your voice is so good and if you didn’t use that, it would be messed up.

Sharmaine: Yeah, ok. I mean I feel like I’ve had my best moments in music. It’s been a very good, not escape, but a good way of confronting your problems and getting through them and admitting things and being very straightforward. 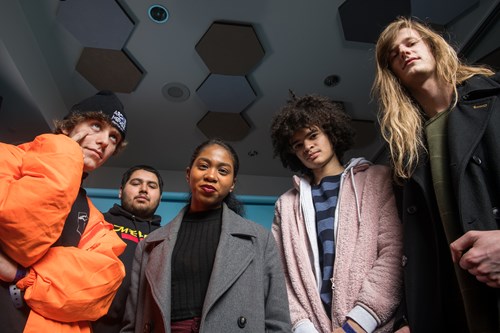 Do you write about what you were feeling in the moment or in reflection?

Sharmaine: It depends. My first two singles were in the moment. One was about being mad in that moment, and then [the other] was just about, “It’s summer time and I want a summer song,” and I just want to make other people feel good.

That’s those two, but then there was another one that came out that was reflecting my past with my home life before that. So, it just depends on how I’m feeling and which you want to write about.

How about the rest of you? Why do you make music?

Jonah: You’re the one that talks the most. So

Theo: As an artist your art is kind of your gift to the world. If you have something to give to people, then you want to give it to them. Thanks why I make music. So, people will listen to it.

Jonah: And the group unity aspect of it. I got into another band with this [Drew] but, it’s like if we all got these skills and then we intertwine them, and then we make things that are amazing to all of us, you know what I mean? It’s like a different level of connecting with another person, and that’s what you do with the crowd too, you bring them into it. That’s just a tight experience in general. 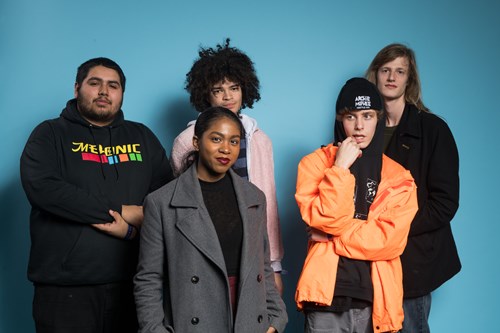 Sharmaine: I hope I get to a point where I can travel around the world and see other scenes rather than just Seattle. That’s been a big dream of mine to go to, like, Japan or Africa and perform.

Jonah: Make an impact in the scene. I I like to do as much as I can. So, that’s why I’m excited, because I haven’t played with anybody like Sharmaine. I also liked her music. But I like working with things that could affect the scene in the city. I’m not personally into lots of the biggest things that happen around here. So, I would like to work with the [music] I would like [to see get] bigger and be a part of that. That would be pretty cool.

Jonah: A change in the stigma of Seattle’s sound. I feel like it used to be really cool. I personally am not against anything, but I feel like there’s just a haze. It doesn’t have its one thing right now, you know? I feel like there are so many good things that just aren’t big enough at the moment.

Drew: I guess I just hope to achieve exactly what I have been achieving, which is just the whole experience, I guess. 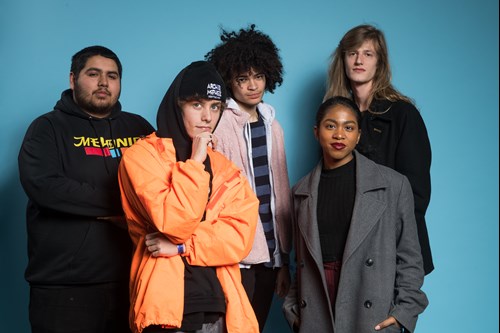 Sharmaine: Oh, we got this.

Jonah: Weren’t we already talking about this?

Sharmaine: Yeah, we already did, to be honest.

Jonah: I wasn’t there for that one.

Sharmaine: What was it? A tangerine?

Drew: Because it’s got some tang.

Sharmaine: It’s got some tang to it.