Like it or not, humanity is dependent on machines.

From cell phones to tractors, we depend on the machinery we’ve created for our jobs, our entertainment, and our survival.

With every new invention, we get a bit better at making them. Modern machines are faster, lighter, and smarter than ever before. But what happens when these machines tip over the edge from “smart” to intelligent?

This is the question James Cameron and his guests explored on the first half of the season finale of Visionaries: James Cameron’s Story of Science Fiction on AMC.

It’s All About Machines

The first thing to do when designing a robot is evaluate your motivations. Protecting your people may seem like an honorable goal, but be careful. That Artificial Intelligence you’ve created might not see you as worthy of protection.

Of course, the two have a history of creating stories about just that. But how did Cameron get the original idea for The Terminator? It came from a dream. 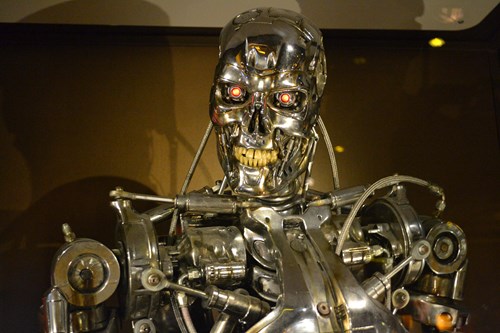 The T-800 in Infinite Worlds of Science Fiction

“I had a dream image of a chrome skeleton walking out of a fire. And I thought, ‘what if he was a cyborg and he looked like a man, and was indistinguishable from a man until the fire?’”

But don’t forget who created the Terminator to begin with.

As The Canon’s Amy Nicholson reminds us, “The plot of the Terminator films are that we’re always fighting against this robot from the future. But really what we’re doing is we’re fighting the humans who keep making this robot possible. As long as humans are aware that we have the potential to create a machine that could control the earth and make us powerful, we’re going to keep doing it. We are really the persistent villain that keeps making these movies happen.” 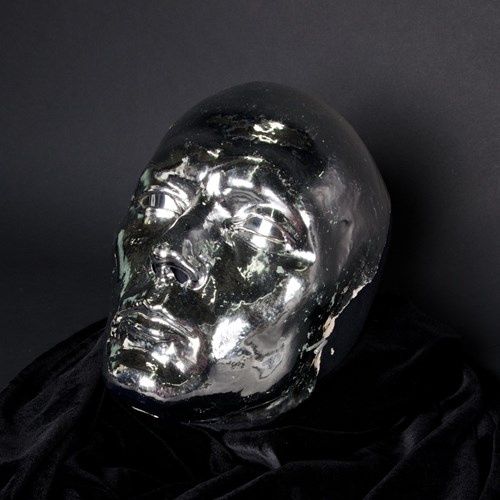 The T-1000 in Infinite Worlds of Science Fiction

The Rest of the Robots

But are robots destined to turn bad?

Author Isaac Asimov didn’t think so. In fact, he felt that these plots were over used and vowed that when he wrote a robot, it wouldn’t "turn stupidly on his creator for no purpose but to demonstrate, for one more weary time, the crime and punishment of Faust." 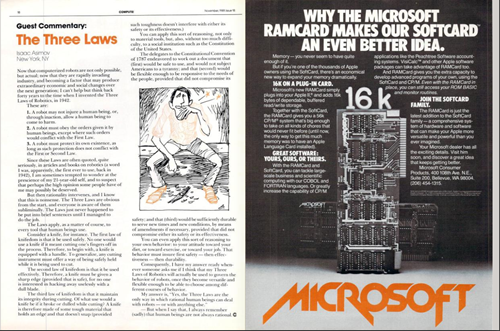 These laws shaped the way many authors thought and wrote about robotics. When asked if he believed his laws would be used to manage A. I. in the real world, he was ready with a response:

“My answer is, ‘Yes, the Three Laws are the only way in which rational human beings can deal with robots—or with anything else.’ —But when I say that, I always remember (sadly) that human beings are not always rational.”

Rules Are Made to Be Broken

The tricky thing about creating artificial life is the obedience problem. If you want to keep things safe, your A. I. must remain selflessly devoted to your goals. This can get tricky if the A. I. starts asking the wrong (or the right?) questions.

In Westworld, the robots are meant to be human playthings in a very mature Wild West-style theme park. As TV show co-creator Lisa Joy said, this theme park is a place for “human id to run amok.”

Many stories of rampaging robots hinged on a single moment when the bot finally snaps, but with Westworld Joy says they were looking to explore the journey before that snap and “dive deep into that schism.” “Because for us,” she says, “that was where the really meaty philosophical question rested.” And that question was “where did lift begin?”

For actor Peter Capaldi, this is the true center of the story. “The robots in Westworld begin to ask the questions, which are the same questions we ask. We have a sense that there is a creator. That there is a purpose; there is a reason that we are here. Unfortunately, they discover that the reason that they are there is simply to be an entertainment.”

The Robots are Our Friends

Good thing for George Lucas. Without him A. I. would have a much bleaker sci-fi history. His creation of the lovable R2D2 and C3P0 brought a friendly robot face to the table.

“At the time,” says Lucas, “I said ‘don’t be afraid of the robots. The robots are our friends.’”

They don't get cuter than that

Once you start looking, friendly robots are everywhere. Whether it’s the sweet trash collector WALL-E or the John Wayne-quoting Jonny 5 from Short Circuit, we all need a pal, and robots like these can easily fit the bill.

To Humanity and Beyond

The final step to integrating A. I. into our world will require us to evolve alongside our machines. As they gain consciousness, we must expand our understanding of empathy.

In Battlestar Galactica humans and the robots they created are locked in a war that threatens to destroy humanity. Humans see Cylons as their creations, made only to do the dirty work, while the Cylons see their creators as outdated. 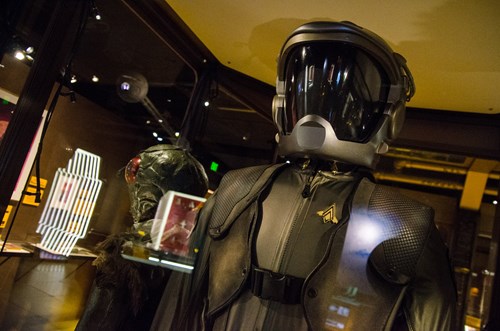 It’s easy to frame the show as a warning, a “be-careful-what-you-invent” tale. But Co-Executive Producer Jane Espenson has a different take. For her the show is about humanity’s greatest weakness: “the inability to see others as worthy as ourselves.”

I think about these ideas when I’m down in Infinite Worlds of Science Fiction at MoPOP to visit BSG’s famous red dress, or to wonder at the detail in the costumes from Blade Runner. If we want to retain our A. I.’s respect, then we’ll have to give it in return.

Or, as Whoopi Goldberg more elegantly put it, “How do we all do this together?”

AMC's Visionaries: James Cameron’s Story of Science Fiction can be found at amc.com