Here are a few of our favorite quotes from the interview.

Jacob McMurray: Was the British Invasion an influence on you?

McMurray: When did you transition from listener to musician?

Dharma: I played accordion at nine years old. I played that for about a year and then I sort of became disinterested because it was apparent to my ten-year-old sensibility that accordion wasn’t really a hip instrument. 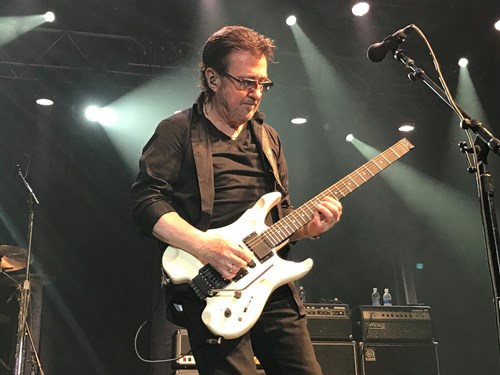 Buck Dharma at home with his guitar

McMurray: What were some of the bands you covered with the Travesty your college cover band?

Dharma: The first Blues Project LP and Paul Butterfield’s band East-West record were probably the biggest influence on our music and on me as a guitar player because to play those songs, I had to really practice to even be able to cover them. It required me learning new technique, which I didn’t possess previously to that.

McMurray: What was your song writing process in the early years?

Dharma: We just went wherever our minds took us.

McMurray: Can you tell me about how you got the name Blue Oyster Cult?

Dharma: We got signed by Clive and we didn’t know what to call ourselves. We couldn’t decide. But we had to commit to something. Blue Oyster Cult is a song title, actually, of one of Sandy’s [Pearlman] songs. And its part of a larger song cycle called ‘The Soft Doctrines of Imaginos,’ which is basically a sort of a docu-drama of history—of Western Civ history—that starts in the late 1700s in England and arcs across to World War II.

The Blue Oyster Cult was a mythical race of amphibious beings that rescue a sailor from a shipwreck.

When we decided to be Blue Oyster Cult we sort of invented a mythology for ourselves, because we almost wanted to be kind of mysterious. You had to have a legend, you know what I’m saying?” 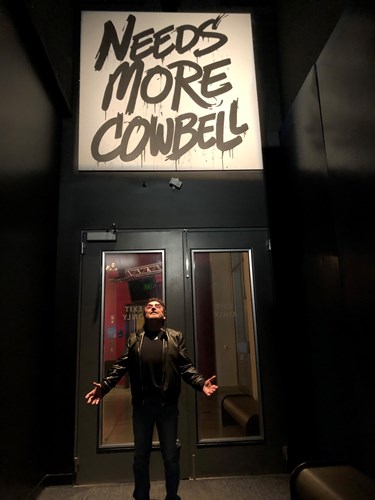 Dharma standing under our glorious sign in MoPOP's Sound Lab

McMurray: Tell me about writing “Godzilla.”

Dharma: The guitar riff I wrote in a hotel room in Dallas. I was a big fan of Godzilla [movies]. It just popped into my head this [hums riff]. You know [Godzilla’s] ripping down the wires and all that stuff. And that lyric was pretty easy to write. If you’ve ever noticed, there’s not many words in that song. There’s like a verse and a half and that’s pretty much it.

McMurray: What was it like playing with the Mahavishnu Orchestra on your first tour?

Dharma: We had to pick our jaws off the floor every night watching those guys play. Cause it was just stunning.

McMurray: Tell me about performing on Alice Cooper’s Killer tour.

Dharma: The Killer show was an amazing show. It’s just funny how your eyes are opened by different experiences. Besides Alice’s theatrics, we learned a lot about how to project to a bigger crowd from Alice and his band.

Thanks to Buck Dharma for being willing to share his story with us!