Designing the Waiting Room to Another Dimension with Rosie Alyea

If you were tasked with designing the waiting room to another dimension, how would you do it? That was the incredible task placed before MoPOP Exhibits Designer Rosie Alyea when she was asked to design the waiting area for the Holodome.

If you haven’t experienced the Holodome, it’s a new immersive reality space that you and your friends can experience together without the headsets used in VR. The Holodome transports you to places real and imagined. In fact, it’s so real, it’s surreal.

I had the chance to ask Rosie a few questions about her experience designing the space. You can read what she had to say (and see some of her beautiful work) below.

Make sure to check out the Holodome next time you’re at MoPOP!

How was the Holodome exhibit first pitched to you?

“An out of this world VR experience.”

Before experiencing the Holodome for ourselves [as a curatorial team], we understood this to be a new technology taking VR to the next level, no goggles, no glasses, but instead, a dome-like structure that you could enter and be immersed with incredible visuals and moving content. 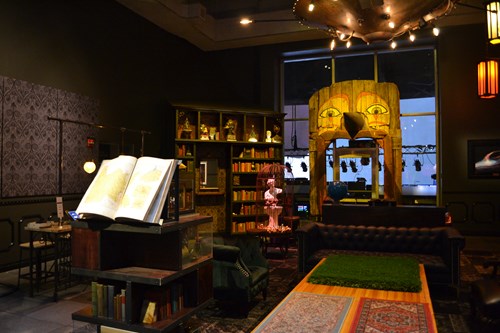 The Traveler's Room at MoPOP

We knew high-level what the content would be, but we didn’t have anything to work with besides that knowledge that there would be four separate experiences, each with their own unique story line, content, and fan bases.

How did you come up with the design of the waiting room?

We had a team brainstorm, and we came up with a lot of crazy fun ideas. One of which was a futuristic travel agency, imagine 2001: A Space Odyssey-inspired travel lounge.

From there, we started thinking about traveling, and the waiting experience, and the fact that these films were so totally unrelated—from different ends of the planet and beyond. Naturally, we were drawn to a sci-fi, futuristic playground, but then we referenced Jules Verne, and we never looked back. 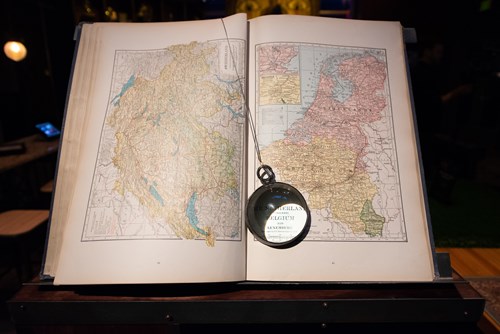 The room is heavily inspired by his literature and fantastical observations of the world. We wanted this space to feel like you were stepping into a time traveler’s home, and you could hunt through all their treasures and mementos. I love patterns, so I proposed the idea of a wallpaper with a twist—inspired by traditional damask but depicting content from all of the films. There are so many hidden gems in this space, it’s almost like a scavenger hunt. It’s a challenge to find them all.

It’s a very abstract space, and that’s what makes it so fun and intriguing. 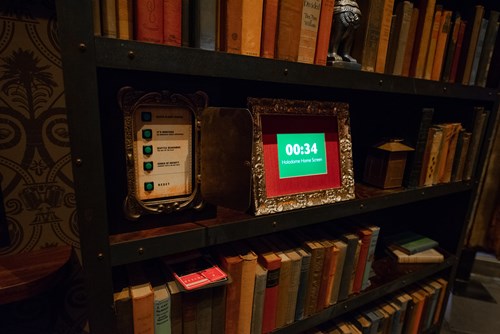 The countdown is on

What’s your favorite piece in the room?

That’s a toss-up for me.

The secret door is of course a very special feature, and Nik made it shine, it’s just perfect. It really adds to the guest’s experience. Hiding the entrance like that, they have no clue until it’s their time to go in that they’ll enter through [REDACTED FOR SPOILERS!] 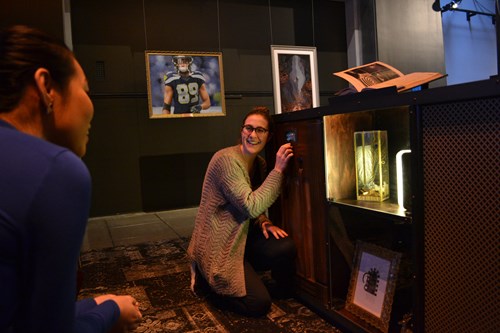 Rosie tuning in to another dimension

As a kid, and even today, I’ve always had this fascination with secret, hidden spaces. It makes adults excited just like kids, and there’s a common ground for everyone to relate. I also really love the drawers you’ll find in the two column bookcases near the front of the space. Again, there’s this aura of mystery and inherent mystique that’s involved when opening something when you don’t know what’s inside.

What was the biggest challenge you had to overcome with the design?

We worked with a very tight budget, and a lot of what you’ll see are reclaimed or salvaged items that have been flipped and refurbished! 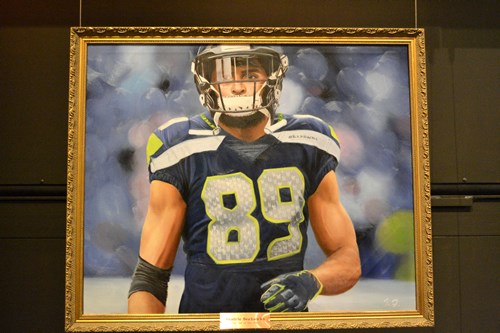 My teammate Keith and I spent at least two days a week at Goodwill, Salvation Army, Earthwise, Second Use, etc. scoping out objects and architectural pieces that would define the space. We had to work hard to be scrappy and think outside the box. Keith and the entire Exhibits Fabrication team are mad geniuses, and I learned so much from them on this project!

Which part of the design experience did you enjoy creating for the most?

Working with the team to custom-curate the artifacts and pieces in the space was surreal! 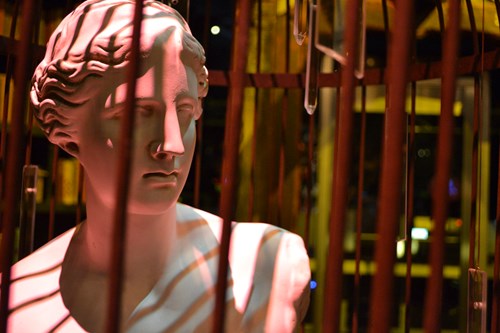 There are so many elements that have meaning, and it was really fun to think through everything. From the oil paintings, which depict a scene from each film, to the robot Venus bust. Venus was discovered in 1820, and Jules Verne came on the scene around 1860, so we wanted to give her a sci-fi twist, but also comment on her meaning to the ancient Greeks as the Goddess of Love and Beauty. She is finally able to gaze at her own beauty and is surrounded by all these different types of reflective surfaces. There are so many stories within stories, and it was a blast to create all the different narratives! 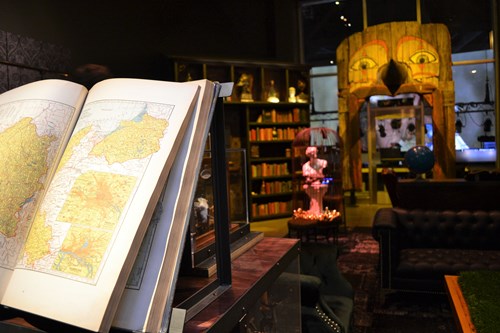 You can visit the Holodome at MoPOP through the end of 2018.